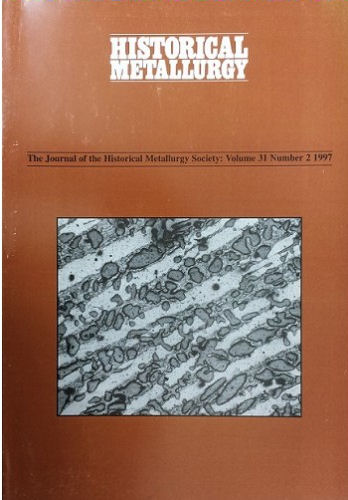 Samuel Paxkes’ notable early contribution (1826) to the knowledge of the composition of base metal alloys of the Roman Imperial coinage has been overlooked in all the relevant works of reference. His work surpassed in extent and equalled ra reliability subsequent investigations of the next 50 or more years. The present account and evaluation of Parkes’ efforts is intended to restore his achievement to its rightful place in the history of the chemical analysis of archaeological and numismatic objects.

This paper describes the development of Henry Clifton Sorby’s metallurgical researches, 1863-5, his innovative specimen preparation and reflected hght microscopical techniques and use of photomicrography. The chronology of the events leading to the eventual publication of these researches in 1886-7 and the further discoveries made by Sorby at this later period are discussed.

The Catalogue lists, and includes descriptions of, the present condition of Sorby’s extant glass-mounted metallurgical specimens now held in the Collections of The University of Sheffield and the South Yorkshire Industrial History Society. The specimens in the former collection were bequeathed to the University by Sorby; the latter (except one) were discovered in 1987 in the effects of Dr Thomas Andrews. It is shown that nearly half of Sorby’s specimens came from one source and that each collection contains one specimen which may be identified as the first metallurgical mount ever made.