This conference discussed metallurgy in relation to status and faith, with guided tours of Rievaulx Abbey and Helmsley Castle. 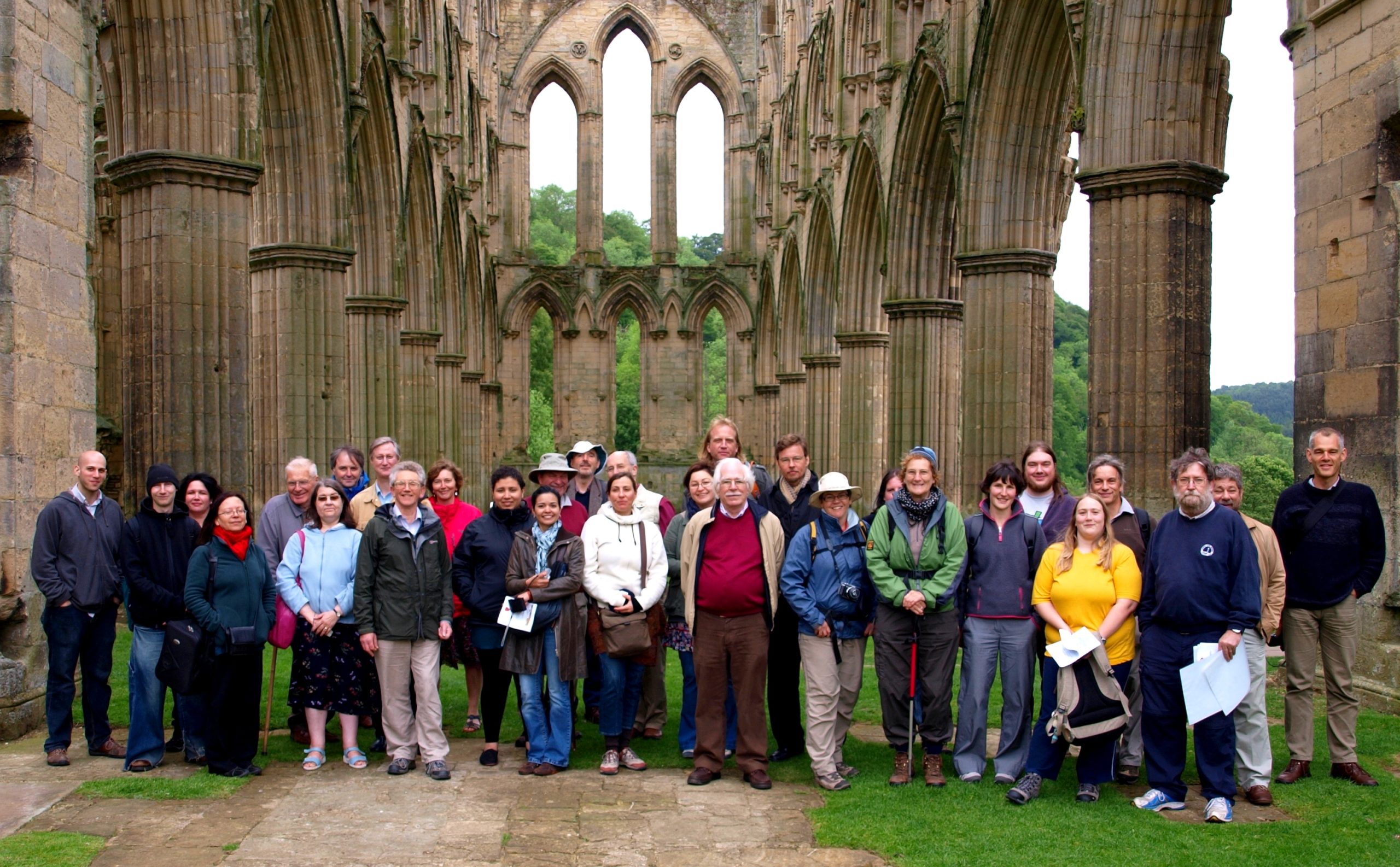 The meeting began with Niklas Schulze describing the casting of small copper alloy bells in pre-Hispanic Mexico. Copper alloy was valued more highly than gold by the Aztecs, and these small bells had an important religious role -they appear to have been ritually deposited in the temple in association with other offerings. The peak of bell production took place between the Triple Alliance of 1428 and the Spanish conquest of 1520. XRF analysis of 781 bells found considerable variation in the type of alloy. Arsenic, tin and lead were the most frequent elements, but the composition varied regionally, and with time; there was also some correspondence between the shape of the bells and the alloy used. Unfortunately there was no evidence for production – documentary evidence suggests that the bells were made in small portable furnaces on tripod legs.

Niklas’ paper was followed by a fascinating study of Jesuit ferrous metallurgy in Venezuela by Ana Maria Navas. Missionary led colonisation in the 18th century spread westwards along the Orinoco River, with iron objects the most significant trade items. Excavation at the Pueblo de los Espanoles del Villacoa provided considerable insight into the way the Jesuits introduced ironmaking technology to the indigenous population. Locally – sourced iron was smelted in a bloomery, and then worked in a blacksmith’s forge. European and African experts were brought in to train the indigenous people, who themselves much preferred blacksmithing to other tasks. After the expulsion of the Jesuits in the 1780s, knowledge of smelting was lost, and ironworking was subsequently restricted to reworking and repair of existing artefacts.

Tim Young then transported delegates across the Atlantic and provided a synthesis of several projects, exploring the role of the church in the development of ironmaking during the early Christian period. The church was a focus for economic activity, it was a “sponsor” of metalworking, and was also a facilitator of technology transfer between areas. There seemed to be an association with the size of smithing cakes and the size of bells being made at some sites with considerable variation and specialization. Smithing changed significantly between the 6th and 9th centuries, and Tim suggested that links with the Merovingian kingdoms were significant in the exchange of culture and technology. Connections between church and ironworking were also noted in a later periods.

Continuing the ecclesiastic theme, Paul Rondelez described his excavations at a Cistercian ironworking site. At Aghmanister (County Cork), an abbey of c.1172 was replaced by an entirely new monastery in c.1278. The earlier church was re-used for the manufacture of iron – finds included smithing hearth cakes, tuyeres and various iron objects, as well as smithing residues. This activity seemed to have peaked during the late 13th and 14th centuries. Amy Bunce and Barry Cosham looked at iron-working in Tulsk (County Roscommom). The research project had identified that a prehistoric ringfort was later occupied by the fortified tower house of the O’Conor Roe family; this strategically-located site was captured by the English in 1593 and rebuilt by Sir Richard Bingham. Excavations recovered smithing debris, most of which was associated with the late 16th and early 17th century occupation.

There were two further ferrous papers. Roy Andrews looked at ironworking in medieval castles in Yorkshire, noting how earlier excavations and analysis had largely overlooked the often quite substantial evidence for ironworking. At Knaresborough, for example, 107,000 crossbow bolts were made in three years during the 13th century; excavations revealed the remains of 14 smithing hearths. At Pontefract, despite there having been no excavations within the castle walls, 18kg of smithing hearth bottoms and associated debris had been recovered. There is clearly considerable potential for further research.

Peter Halkon began his paper on iron, myth and magic by singing a folk song which encapsulated several long – standing themes of transformation and ritual. He then explored a range of iron related myths (including Wayland, Sigurd and Vulcan) before considering the particular landscape of east Yorkshire in the late Iron Age and Roman periods.

Moving away from iron, Chris Witney-Lagan presented very interesting piece of research on pewter dress accessories from the 10th century onwards. There was no documentary evidence for pewter production between c.900-1200, but the archaeological collection of the Museum of London had the potential to provide important evidence. Pewter may have been used to imitate silver, but it became an increasingly high-status material in its own right, with ecclesiastical use from the 12th century. Over 70% of the 223 objects Chris had examined were brooches, with a bewildering array of styles which provided a great deal of information on the status, connections and affiliations of the wearer. XRF analysis suggested no particular pattern in the composition of alloys, demonstrating the need for Guild control which was eventually imposed in the 14th century. Finally, Steve Sherlock outlined the excavation of an unusually rich Anglo-Saxon cemetery at Street House (Yorkshire). The “bed burial” in Grave 42 was the most northerly in the country, suggesting royal connections with the south-east. Jewellery included a pendant incorporating Iron Age gold coins, and another piece which reused the gold from Merovingian coins. Some pieces were extremely well made and had clearly been handed down over several generations as shown by evidence of repair work.

After the paper presentations delegates were treated to a series of field trips led by Gerry McDonell to various medieval and post-medieval ironworking sites. These included Rievaulx Abbey (where the post-medieval blast furnace made good use of former monastic buildings) and sites of earlier monastic iron-working at Bilsdale including a water-powered site which created considerable discussion in the field. Gerry also led a trip round Helmsley Castle. Many thanks to Eleanor Blakelock and Gerry McDonnell for organising such an excellent meeting which introduced a number of different themes, and struck a good balance between lectures and field visits.

Written by Paul Belford for the HMS Newsletter 78