The AGM was followed by a series of invited lectures and field excursions on the Sunday to mining areas in West Cornwall.

Mining and metallurgy in West Cornwall 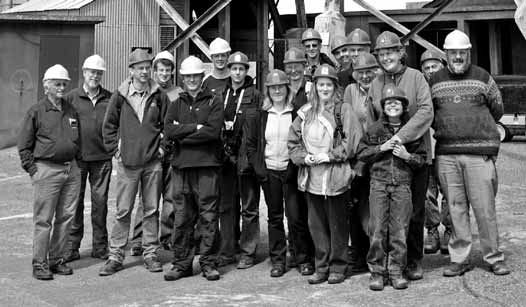 Talks include an introduction to the Cornish Mining World Heritage Site, developments in the microcharacterisation of metals
and materials, and recent progress on the Exmoor iron project. A tour was arranged of new facilities at Camborne School of Mines including the museum, a demonstration of modern digital surveying instruments and the modern suite of microanalytical instruments.

The next day there were tours of the many mining areas in West Cornwall.

This year the AGM which was combined with a Spring Meeting was held in Cornwall (Figure 1). The Spring Meeting included several papers on metallurgical themes relevant to the South West and fieldtrips to several mining sites. The AGM, meeting and fieldtrips were organised by Jens Andersen (Camborne School of Mines), Gill Juleff (University of Exeter) and Ainsley Cocks (Cornwall County Council.

The Spring Meeting which followed the AGM had four papers of direct relevance to the South West. The first paper on the Exmoor Iron Project was presented by Gill Juleff and Lee Bray. Before the Exmoor Iron Project (often referred to in short hand as ExFe) started in 2001 almost nothing was known of the pre-19th century ironworking in this area. To date ExFe has included four-and-a-half years of fieldwork which sought to integrate several strands of investigation: landscapes, sites, materials, artefacts and laboratory analyses. The excavations and other fieldwork have concentrated on a number of different areas: Horner Wood, Dulverton and Sherracombe Ford. The Horner Wood area has provided abundant evidence for post-medieval woodland management, charcoal burning and water-powered smelting and smithing. Investigations in the Dulverton area have included the medieval stone-built furnaces at Shircombe Slade, and the curious late Roman ironworking at Blacklake Wood. The excavations at Blacklake Wood recovered numerous fragments of blooms as well as a large lump of slag (the ‘frozen contents of a furnace’). While fragments of bloom are not unknown from bloomery smelting sites, these were the intended product and the vast majority were taken away. At Blacklake Wood the smelters seem to have carelessly discarded many fragments of the very thing they had been trying to make. The large lump of slag from one furnace does not seem to be a furnace bottom but instead is virtually the entire contents of a small shaft furnace which solidified before the smelt was completed. While the reasons why the smelt was abandoned are unclear (and may never become clear), the preservation of this slag provides a new insight into early bloomery smelting. Sherracombe Ford was a Roman iron smelting site and its excavation provided a showcase for the ExFe project. The site(s) consist of platforms partially dug into the hillside and partially resting on dumped material (mainly slag heaps). The excavation of several platforms uncovered several furnaces, a smithing floor and extensive slag heaps.

The ExFe fieldwork phase has applied two techniques to slag heaps to reveal aspects of ironworking as a rural industry: quantitative test pit sampling and deposit characterisation. The test pit sampling provides quantitative data on the composition of the slag heaps; the first results suggest that many traditional (e.g. Henry Cleere’s) estimates of the slag density in slag heaps are substantially too high. The deposit characterisation follows on from the work by Henry Cleere in the Weald and seeks to classify groups of contexts by the sorts of activities that produced them: the preparation of raw materials (e.g. ore roasting), furnace construction, smelting, and furnace destruction/rebuilding. The cyclic nature of the activities (and the resulting stratigraphy) offer the chance to understand social and economic aspects of early iron manufacture.

Peter Claughton and Chris Smart gave a paper on the Silver Mines at Bere Ferrers, Devon. Initially argentiferous galena outcrops were directly exploited by the Crown but after the mid fourteenth century they were granted on lease to outside interests. Adits were driven from the 13th century to assist with the draining of the mines and allow the recovery of ores from below the water table. By the 15th century water-powered pumping was in use to allow the mining of the deeper ores. The development of smelting techniques during and after the medieval period allowed the re-smelting of earlier slags and so these are now virtually unknown. On going landscape survey, supplemented with GPS terrain modelling, is starting to characterise the Bere Ferrers landscape. The existing landscape is being compared with early maps (e.g. Tithe Maps) to reveal those mining elements which pre-date the 19th century.

The work of the Camborne School of Mines (CSM), in particular the state-of-the-art scientific equipment, was described by Jens Andersen. Jens admitted that the CSM was no longer at Camborne (it is now at the Cornwall Campus of the University Exeter near Falmouth) and is no longer exclusively a school of mining. The CSM has weathered the changing fortunes of mineral exploitation in Britain and beyond and now provides training on a diverse range of topics including the exploitation of sustainable energy sources. The CSM has a suite of laboratories which house some impressive analytical instruments. The star attraction (for me) in the laboratories was the QEMSCAN (Figure 3) which consists of a scanning electron microscope (SEM) with four energy dispersive X-ray detectors (conventional SEMs have only one). The extra X-ray detectors allow the rapid collection of large quantities of data and make it possible to assemble large, detailed maps showing the distribution of different elements in a sample. The data is used to determine mineral compositions for the various inclusions present. The QEMSCAN has already been applied to a range of archaeological material. The QEMSCAN has been used to examine a fragment of the smithing floor from Sherracombe Ford. This proved to be a highly heterogeneous sample which seems to contain relatively little evidence for smithing (e.g. hammerscale). Fragments of slag present might be smelting slag in the strictest sense or possibly slag extruded during bloom consolidation.

The final paper of the Spring Meeting was given by Ainsley Cocks of Cornwall County Council’s World Heritage Site (WHS) team. He described the work of the team which had led to the inscription of the Cornwall and West Devon Mining Landscape as a WHS on the 13th July 2006. This WHS was formed by the cultural tradition of hard-rock mining that contributed to the development of the Industrial Revolution. The WHS also has a global dimension as the hard-rock mining technology developed in the South west was exported to many other parts of the world (e.g. South Africa, Australia and Mexico). The WHS, which consists of ten separate landscape elements spanning 1700–1914, including mines, smelting sites, iron foundries, chapels, agricultural landscapes connected to mining. The WHS team has been working closely with a range of interested groups to develop a management plan which will ensure that historic remains are treated sympathetically.

After the lectures we had a tour of the CSM facilities, including the state-of the-art laboratories. That evening we were treated to a boat trip along the Fal river which ended at the Pandora Inn (Figure 5) where the conference dinner was held. The dinner was delicious and the company convivial (I especially enjoyed learning that one of Gill ancestor’s had been born in a mine!). Eventually we squeezed ourselves into taxis and were whisked back to Falmouth where subjects metallurgical and non-metallurgical were discussed over drinks until late.

The following morning we re-assembled at the CSM for the fieldtrip. The first site we visited was Rosevale Mine at Zennor. There is very little recorded history for this mine before the 18th century. It was worked on a smallscale by local miners during the 18th and 19th centuries but ceased activity about 1840. The mine was re-opened for a few years just before the First World war but the documents which survive indicate that while the mine yielded some tin this never balanced the cost of mining the ore.

Rosevale mine is now privately owned and has been restored and preserved as a typical Cornish Mine. Our two guides were Tony Bennett (Figure 6) and Mike Shipp. The principal under-ground workings consist of two horizontal tunnels driven along a tin lode, named the Red Lode. The mine is self-draining and has natural ventilation throughout the year. After being kitted out with hard hats and mining lamps, we entered the mine along the lower of the tunnels and were shown a variety of mining features. Perhaps my favourite moment was deep in the mine where Tony lit a candle and asked us to turn off our electric lamps so we could appreciate the amount of light provided by a single candle. Once we had switch off our lamps and our eyes became accustomed to the dark we could see that a single candle actually provides substantial illumination. Tony then blew out the candle so we could fully experience the darkness and we waited to see who would turn their light back on first. We then climbed 27m up ladders in the main stope to the higher tunnel and made our way outside. I had been a little nervous about the idea of going underground but I found it great fun and one of the many high-points of the conference.

We then made our way to Geevor Mine. Geevor tin mine has included a variety of different mines over the centuries. Mining companies were often formed by the amalgamation of separate but adjacent mines which are known by many different names. Mining had started by the end of the 17th century but ceased shortly after 1837. Mining commenced again in 1851 and by 1860 undersea exploration was being carried out. In April 1867 miners in the inland section accidentally broke into the flooded workings of an adjacent mine, an incident which cost the lives of five miners. Although the mine expanded over the next decades operations closed again in 1891. Geevor worked intermittently from 1892 to 1904. In 1905 the West Australian Gold Fields Company Limited acquired the mine and introduced electric power. The mine continued through most of the 20th century due to the discovery of fresh reserves of ore. The drop in price of tin in the 1980s lead to the collapse of the mining company and the production stopped in 1990. In 1991 the pumps were switched off and the underground working flooded. The Geevor Tin Mine Heritage Centre opened in August 1993 and is now the largest preserved mining site in the country. Bill Lakin was our guide and he showed us through the surviving surface remains which included a winding house and extensive ore processing plant (some of which he was able to demonstrate). The lunch provided was highly appropriate — a large Cornish pasty!

We then made our way to the mines at Botallack where Adam Sharpe showed us and members of the Cornwall Archaeological Society several mining features including an area with apparent fire-setting, the engine houses on the cliffs overlooking the sea (Figure 7), and the restored arsenic calciners. The weather was excellent and we could even see the Scilly Isles off in the distance. This was certainly one of the most best meetings I have ever attended; the range of presentations, social events and field trips provided a stimulating and enjoyable experience. Thanks to the conference organisers Gill Juleff, Jens Andersen and Ainsley Cocks.

Written by David Dungworth for The HMS Newsletter 66