Annual conference held in Lydney in the Forest of Dean, Wye Valley and South East Wales

Metallurgy in the Forest of Dean

The Forest of Dean

Organised by Ian and Diane Standing 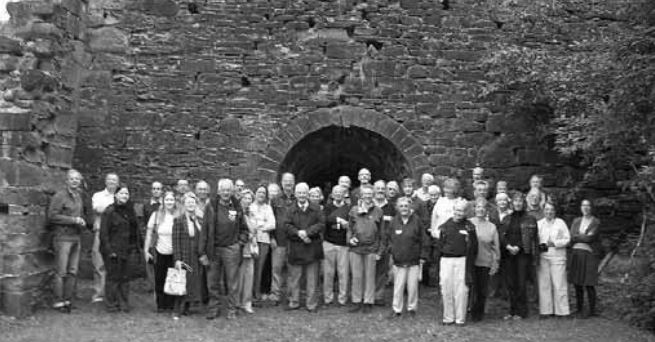 Talks include an introduction to the Cornish Mining World Heritage Site, developments in the microcharacterisation of metals
and materials, and recent progress on the Exmoor iron project. A tour was arranged of new facilities at Camborne School of Mines including the museum, a demonstration of modern digital surveying instruments and the modern suite of microanalytical instruments.

The next day there were tours of the many mining areas in West Cornwall.

Some 42 members and guests attended this year’s annual conference which was a return visit to the Forest of Dean area. Accommodation in the Dean area has always been a problem but we were suitably housed in the Dean Field Studies Centre in Parkend, near Lydney. Most of us arrived during the afternoon of Friday 15th September and after dinner were told some of the background to the area and to some of the sites we were to visit on the Saturday field trip. Tim Young introduced us to iron making in the region down to 1500 and managed to make the all-important geology of the area clear, in a way that even I, with very little knowledge of geology, was able to understand. Joan Day gave an insight into the Bristol connections in the area. Ian Standing then gave us a masterful survey with many personal insights of the iron production in the Dean and Wye Valley area from the middle of the 16th century to around 1900.

After breakfast on Saturday and collection of the all important packed lunch, we set off for a full day of site visits, beginning with a route which took us from Parkend via the valley of the Newarne Brook to Lydney. Below Parkend the brook powered one or more 17th century charcoal iron forges before entering the Lydney Estate, on which were its Upper, Middle and Lower Forges. It seems that the first Lydney Furnace of the Wintours also used the brook. In later years, the valley hosted tinplate manufacture, collieries and, in 1927, a coal-fired power station. Unfortunately there was not time in our schedule to stop at Chepstow, a once important Marcher Lordship with castle, walled town and important port. The old road bridge, built in 1816 of cast iron by John Raistrick, carried the London to South Wales road traffic until 1966.

Our first stop, Tintern, was the site of the first waterpowered wire works in Britain, in about 1556. The works were controlled by the Mineral & Battery Company. Wrought iron for wire drawing required ductility and this was supplied as ‘Osmond Iron’ by the Monkswood Furnace between Usk and Pontypool. There appear to have been two furnaces at Tintern; one near the river built on land of the Earl of Worcester and first documented in 1629. The second, which we visited, was a site well up the Angiddy Brook. It is first mentioned, in 1669, in the Foley accounts and by 1707 John Hanbury and George White were supplying pig iron to the Knight’s Stour partnership. The furnace was long lived, eventually closing around 1828. Towards the end, David Mushet used it for experimental smelting of Indian wootz ore. The site was excavated and conserved under the direction of John Pickin in 1979–80 who fortunately was with us for the conference and we benefited from his guidance. The site, once a meticulously excavated site, was now very overgrown and a good example of what happens to sites if they are not looked after and conserved regularly.

From Tintern our route took us up the river Wye, which we crossed at Bigsweir on a single arch bridge cast a Merthyr Tydfil in 1826, and on to Redbrook. Two powerful streams reach the Wye at Upper and Lower Redbrook, where from about 1800 to 1961 stood the Redbrook Tinplate Works. Although a traditional hand rolling mill it survived for a long time by producing ultra-thin plate — at 0.0025ins, it was said to be the world’s thinnest. The works were served by a branch of the Monmouth-Coleford tramroad, via the self acting incline at Upper Redbrook. After 1876 it was supplied by the Wye Valley Railway.

The Upper Redbrook valley was equally industrialised with charcoal blast furnaces, from 1604 to 1816 and copper smelting from 1690 to 1730. From 1774, a further tinplate works (on a former copper works site) operated in conjunction with the Lower Tinplate Works; also a foundry and a brewery. Kings or Quick’s Mill is recorded from at least 1400 and finished life as the Wye Valley Flour Mills. A reminded of past activities were the black slag blocks, from copper smelting, used in local walls and buildings.

From Redbrook we drove to Coleford, a small settlement around a ford over the Collar Brook. The settlement extended down the Whitecliff Valley and, in the 15th century it contained an ‘orehall’, ‘oresmyths’, ‘colsmyths’and ‘hondsmyths’ all of which were buildings, not people. Two old roads leading to Coleford were once called the orewey and the colway. Nearby is a settlement entitled The Scowles. The earliest written appearance of the place-name is 1434 which gives some indication of the antiquity of the mining there.

We then stopped at Whitecliff furnace, a cold blast, coke fuelled furnace stack, built and rebuilt 1798 to 1810. The surviving stack is probably the second furnace and was refurbished by David Mushet between 1809 and 1811. A massive inclined way from the valley floor gave access to the charging platform. An abutment for a charging bridge indicates that a third furnace was planned. The site also accommodated a paint works and several interesting personalities. Mushet’s endeavours were not successful and the works failed before 1816. The stack has received five stages of conservation repairs and more are planned by the owners, Dean Heritage Museum Trust. I am sure that many members remember the fund-raising efforts of the Society to ensure that the site was bought and preserved and it was good to hear that the site is being cared for and it was particularly appropriate we should visit as a society.

Seeing a road sign to something called Puzzle Wood would not have elicited any positive response from me — probably just a children’s playground. How wrong can one be! It is a semi-natural ancient woodland the extent of which is defined by the scowles it contains. Scowles are weathered, ancient surface workings for iron-ore and they date from early times to the late medieval period. The wood was turned into a rustic maze around 1900 and it is easy to get completely lost. This was one of the highlights of the trip and one could easily agree that it was one of the inspirations for Tolkien in writing about the forests in his books.

Clearwell Caves are underground workings for iron-ore, now open as a well lit show mine. The upper workings may be of early date although some of them were reworked, probably more than once. From about 1800 onwards, shafts and pumping gave access to previously submerged ore bodies. It is worth recalling that around 8 million tons of Dean ore were won by hand and about half of that was carried to surface on the backs of miners. After 1800, the deep mines won a further 4 million tons of ore, all of which was wound up shafts to the surface. The Caves are now open to the public and on the afternoon of our visit we were able to watch an experimental smelt in progress.

From Whitecliff we went on to Darkhill ironworks where we were guided round the site by local historian Keith Webb. David Mushet survived the failure of Whitecliff because he had invested in collieries. By 1818 he was also associated with Darkhill and built a cupola furnace there. This was probably for experimental work as well as for production. There was a crucible steel works and, by about 1840, a blast furnace lower down the site. There was also a brickworks and the site was served by a branch of the Severn & Wye tramroad and, after 1875, by the railway.

Robert Mushet, son of David, also used the Darkhill Works. He produced crucible steel and like his father he was an experimenter and inventor. He provided a solution for the original failure of the Bessemer Process. Later, at his adjacent Titanic Steelworks, he invented and developed the first tool steels -—RMS. This was taken up by the Osbom Company of Sheffield and proved successful.

From Darkhill some of the party walked back to the Field Centre by foot and were rewarded by a route, mostly on the former railway, passing quarries, old tramroads and varied tree crops. Those of us too tired by a superb day of visits, enlivened all the way by the amusing, anecdotal commentary from Ian Standing, returned in the coach!

At dinner on Saturday night, served by an enthusiastic and very helpful staff, we were able to toast the 85th birthday of Robson Davies, one of the longest surviving members of the Society and someone who helped to keep the Society going in the early days.

Afterwards we were treated to a series of short contributions from members. David Cranstone spoke about some recent work he had carried out at Wilson House in Cumbria, the site of John Wilkinson’s model farm where he has tentatively identified the site where he kept an iron boat. Jeremy Hodgkinson then told us about the exciting discovery of a 2nd century Wealden bloomery currently under excavation by the Wealden Iron Research Group. Just as in the best serials at the very end of the last day of the current excavation a second, and even more promising site, was discovered which they hope to excavate next year. St Brievals has long been known as site where the iron heads for crossbow bolts, quarrels, were made, and local historian, Alf Webb, shared his local knowledge and enthusiasm of a fascinating medieval industry. Mike Davies-Shiel then told us about his work, Fieldwork, Parish Registers and Bloomery Sites in Cumbria. Joan Day showed a short video of the Saltford Brass Mill and the work that has gone on to preserve and present this unique site to the public. Finally Alan Freer presented a paper on his work on preserving Roaring Meg, a castiron mortar cast for the siege of Goodrich Castle during the English Civil War and the model he has expertly cast of the gun.

Sunday morning was devoted to longer papers. First was Jon Hoyle on the problems of interpreting field evidence for the early period, in which he told us about new ways to carry out survey work by a new method called LIDAR. This aerial technique, which aroused a great deal of interest, has been used for extensive survey work by the Environmental Agency.

Unfortunately Maurice Febry was unable to present his paper on the Dean iron-ore miners but Ian Standing gave us an impromptu survey of the miners of the Forest. Finally Robert Protheroe Jones brought the whole story up to date with a presentation called: From State Intervention to Multinational Rationalisation: Llanwern and Ebbw Vale Works, 1935–2001.

This memorable and highly enjoyable conference was a great success due in very large measure to the hard work of Ian and Diane Standing who were ably assisted throughout the weekend by Alan and Di Freer – one which I am sure will be remembered by those fortunate to attend.

Written by Robert Smith for The HMS Newsletter 64