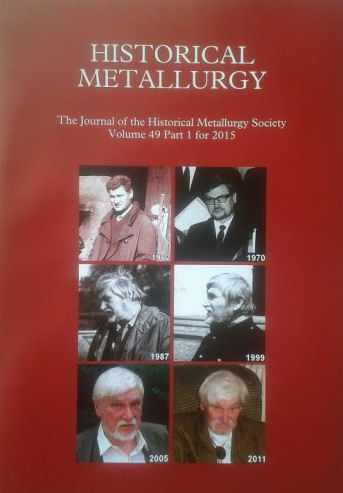 Radomir Pleiner’s death in January 2015 marked the end of an era. For sixty years he was one of the key figures in the study of early iron working, as demonstrated by his remarkable publication record of 12 books and over 250 papers (Cleere 2011). He initially trained as an archaeologist and it was his teacher Professor Jan Filip, the renowned Celtic scholar and editor of Archeologicke rozhledy, who suggested that he should carry out research into early ironworking. By his early thirties Radomir had been awarded his first doctorate, had published his first three Czech monographs, in 1955, 1958 and 1962, had written over 30 papers and had established the metallography laboratory at the Institute of Archaeology in Prague. For many people this would have been a satisfactory career, but for Radomir it was only the beginning.

His lasting legacy will undoubtedly be his two magisterial books. Iron in Archaeology: The European Bloomery Smelters (2000) and Iron in Archaeology: Early European Blacksmiths (2006) which formed a fitting conclusion to his long and uniquely successfiil career. However, for those who had the privilege of knowing and working with Radomir it will be for his human qualities that he will be long remembered. As one of the contributors to this Celebration pointed out, his parting gift to us all was to enable the renewal of contact between old friends and for us to join together in paying homage to a great man

A cast-iron bridge pier weighing 1.38 tons and dated 96 BCE was discovered in 2007 near Chengdu, Sichuan, China. Nearby were found fragments of the mould in which it was cast. The article describes the metallography of the artefact and reconstructs the process by which it was cast.

This paper compiles and reviews the chemical analyses ofarchaeological copper alloy metalworkfrom the earliest documented attempts around 1775 to the first major compilation by von Bibra in 1869. The early analyses (up to around 1845) are often incomplete even for the major alloying elements (Sn, Zn, Pb), and rarely report any trace element data, but by the 1850s gravimetric analyses often include up to 10 elements or more, and are therefore as complete as many modem analyses. The large samples taken (Ig of metal), whilst not in line with modem practice, does mean that the analyses are likely to be minimally affected by inhomogeneity and surface enrichment phenomena, which can be a problem with modem micro-analyses. This paper is based on approximately 110 publications between 1775 and 1869. The published data from the major contributions have been digitized and are available on the  RLAHA website.

New documentary evidence is presented which indicates the existence of an early 17th-century blast furnace beside the river Wear, near Hunwick, Co Durham (NZ 1988 3316). The furnace was built in or before 1632 by the Whartons of Gillingwood, North Yorkshire, who are better known for their later involvement in the lead industiy. Ironstone was brought to the furnace from surface workings 2hn distant, near Constantine Farm. After the death of Thomas Wharton in 1641 the furnace was sold, in 1647, to Thomas Bowes ofStreatlam Castle and Charles Vane ofRaby Castle. After the Restoration it was briefly used by the Bishop of Durham. In the 1670s or 1680s thefiimace was replaced by a fulling mill.