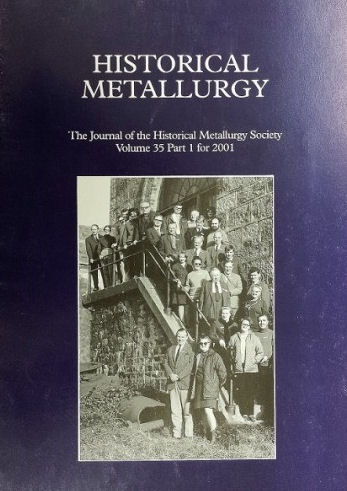 Early lead smelting sites in the Swaledale area of Yorkshire

Many bale smelting sites have been located in the Swaledale area. Their locations were influenced by several factors, principally a position within a few kilometres of lead mines, with ready access to the valley floor and sufficiently elevated to catch the prevailing winds. The site topography was very varied: many bales were at the head of a scar, preferably with an open aspect, but sloping ground was commonly used. The ideal was a ridge or a rounded hill projecting from a fellside, allowing operation under a wide range of wind directions. An additional geological factor was a position with a refractory silicious base rock underfoot. Sandstones were imported where necessary. In some areas there are many more bale sites than elsewhere and possible reasons for this are discussed. Most bale sites had no associated pits or structures and httle slag, indicating batch smelting of small quantities of pure galena. Possibly larger quantities were smelted in shallow pits with a forward opening, set on a slope at the head of a brow. A few sites had charcoal dumps and slags which indicate higher temperatures were attained, and the technical imphcations of this are considered.

Rookhope Old Smelt Mill (Scheduled Ancient Monument No 29010) was abandoned some time after the construction of Rookhope Smelt Mill 1km to the E by the Blackett company between 1730 and 1740. In 1995, the authors earned out a survey of the site and were able to confirm its use for smelting lead ores. There were one and possibly two smelting mills on the site together with evidence of slag crushing and ore dressing operations. There is a system of leats to supply water to the various operations. The site is overlain to the W by the dam of the newer Rookhope Smelt Mill and the shafts and outlet from the Tailrace Level to the E. In August 1999, the Environment Agency commenced work to bidld a lagoon to intercept silt earned by water overflowing from the nearby Eraser’s Grove mine further up the valley. This work has destroyed much of the old smelt mill site.

Developments in the iron foundiy products and technology of John Harper & Co are reviewed, from its origins in the 1850s making white-heart malleable iron castings for locks and keys, grey iron castings for decorative hardware in the 1890s and for the electrical, typewriter and other industries in the 1920s and 30s, then Meehanite engineering castings in the 1940s and 50s and Spheroidal Graphite iron in the 1960s and ’70s. The company was eventually taken over in 1974 and the foundry closed in 1982. Changes in metallurgical production processes are reviewed in relation to changing economics, management policies, markets, and technologies.

The increasing importance of chemical analyses for the interpretation of slags found at archaeometallurgical sites has increased the need for a reference material for ancient iron slags. Several sets of analytical data on the Swedish reference slag W-25:R are presented and discussed.